Find an online Shakespeare translator difficult? Don’t worry; you are not alone. It can be quite an arduous work to comprehend the Bard of Avon.

Well, not anymore. There are solutions to most of our problems and queries in this global world, and a lot of them are available on the internet.

A lot of online tools have now made understanding Shakespeare a piece of cake. These are ‘Shakespeare translators.’ So, you need not lose any more sleep over deciphering the works of Shakespeare.

Explore these online translator tools, and step into the world of Shakespeare that lies ahead!

You would get exaggerated translations that produce the comic effect, more serious translations, translations to old English as well as early modern English under which category, the Shakespearean or Elizabethan English falls.

They might use some exaggerations in early modern English to produce humor, but that is mentioned.

You could choose to translate your sentence to more serious old English too. There’s a lively discussion panel you could join too.

This tool is going to take you to the magnificent world of Shakespeare and bestow you with valuable knowledge and an ability to understand and converse- speak or write in English, not only of the present day but of the times down the ages.

How wonderful to decipher and speak the language the characters of Shakespeare so memorably spoke in the plays!

This tool provides the most popular Shakespearean plays with translations alongside them- a handy feature indeed!

It also has various other exciting features like ‘quotes’, ‘biography’, ‘courses’, ‘videos’. Also, there are quizzes you can take, which are fun and enlightening at the same time.

You could examine your knowledge of Shakespeare and improve it too!

This tool also has an air of humor that permeates throughout, and it is bound to bring a smile to your face.

They help you learn in a manner of storytelling, which makes learning enjoyable and easy.

Many schools and institutions are known to be using this tool as support besides their own courses and curriculum.

Your Dictionary Shakespeare Translator is a tool where your queries are answered lucidly. There are a lot of things you can avail of in this tool.

It tells you about the meaning of different terms used in Shakespeare’s plays and poems and their reference to the context there in a brief manner.

It also provides an alphabetical list of the most common words used by Shakespeare, which have been translated into the English of the present day.

There is also a list of phrases that Shakespeare coined himself and the plays they were used in.

Additionally, they have an exciting section that explains the set of pronouns we use today, as they were used in the Elizabethan or Shakespearean days.

There are also a lot of interesting history as well as linguistic facts that are provided.

You could also learn to talk in the language Shakespeare used!

Fun Translations, as the name suggests, is a fun way of translating the English of today to Shakespearean English.

There are some other exciting features like ‘Shakespeare Name Generator’ where you can get a Shakespearean name if you want.

Also, you can create an app of your own with their ‘Shakespeare English API.’ This is quite a unique feature.

This website would provide you with a merry-go-round of fun and mirth besides providing you with valuable information and knowledge.

Gear up for your to ride into the world of Shakespeare.

This tool would enhance your understanding of Shakespeare manifold, the entire process being full of enjoyment, which is your extra gain.

Thus it would be quite beneficial if you use this tool. 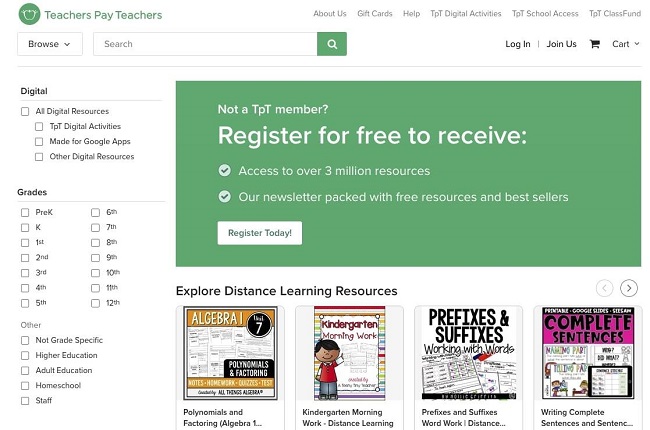 TeachersPayTeachers.com is yet another wonderful tool where you get a large number of wonderful translations and other works on Shakespeare by various people.

These can be either paid or free. You can buy these works from this website. You can either be a member or can register for free.

So, you can get exactly what you want by choosing from the categories that suit you best.

It is a great platform where you can avail wonderful and helpful resources that would cater to your specific needs and provide you with much more.

LitCharts Shakespeare Translator, a very meticulously organized tool for Shakespeare translation, is a one-stop solution for your queries and doubts regarding Shakespeare.

They have the modern English translation of Every Shakespeare play, poem, and sonnet that would be comprehensible to everyone.

They also have a detailed summary as well as an analysis of each scene. Themes are also marked and explained.

The themes are color-coded, which makes it easier for readers to understand. Thus, it certainly guarantees an obvious understanding of Shakespeare.

They also have other interesting features like ‘sortable quotes’ that can be sorted by location, character, and theme.

Thus, it becomes easy to find out what you specifically want. This tool also encourages close reading, which provides us with a deeper understanding of the text.

They also provide ‘data visualization,’ which is very handy besides being attractive and effectively catching attention.

Also, they have pdfs which are in chart-based formats, which are extremely convenient.

SparkNotes Shakespeare Translator is a great tool for the translation of Shakespeare’s works.

They also help us understand the works of Shakespeare properly and clearly.

They provide the full texts of Bard’s plays and sonnets and translations into present-day English.

They also provide intricate summaries and enlightening analyses. They have quick quizzes too, which is an exciting feature.

It helps in the revision, testing of knowledge, and adds the fun element in learning.

The plays are arranged alphabetically, which makes it easier to find them.

They also have a study guide that provides a biography of the author, historical and social contexts, quotations by the author, and much more.

They are also open to feedback and try to make improvements or fulfill the readers’ requirements, which makes them user-friendly.

They have a programmer called ‘No Fear Shakespeare’s, which, as the name itself tells us, solves the incongruity in understanding Shakespeare. 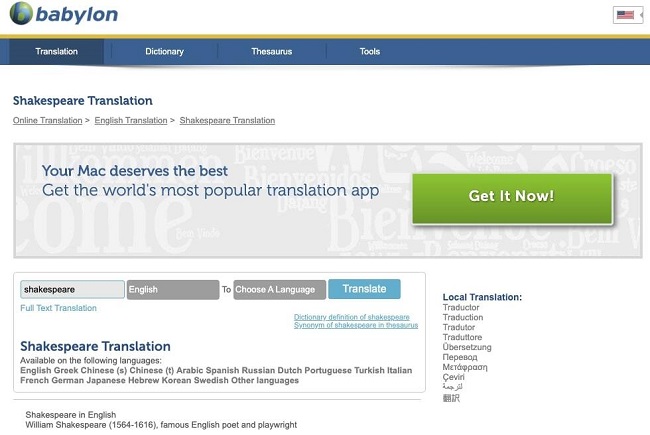 Also, the tool is free to download. So, you can avail yourself of the tool’s benefits without having to pay any extra charges for that.

Translations of Shakespeare into so many languages would not only help you understand the Bard better but also open up the wonderful world of Shakespeare to people belonging to different parts of the world.

Thus, widening the arena of interpretations and inviting people to look at the works of Shakespeare from many different perspectives.

This tool makes Shakespeare’s works available to people worldwide in their own languages, which does reading and comprehending Shakespeare easier.

Nosweatshakespeare is an engaging tool for Shakespeare’s translation. They have several interesting features.

‘Shakespeare Quotes‘ provides quotations, monologues, and Shakespeare soliloquies, which can be sorted by play or theme.

‘The Plays’ provide summaries of the plays by the playwright, introduces us to the characters of the plays, and explains the different types of plays by Shakespeare like tragedies, comedies, histories, etc.

‘The Sonnets’ provide a modern English translation of all of Shakespeare’s sonnets and poems. It has some other features too.

‘Shakespeare’s Characters’ provide a study of the most famous characters in Shakespeare.

‘Shakespeare’s Theatres’ tells us all about the different London theatres Shakespeare was related to. ‘Shakespearean Insults’ is yet another feature.

‘Shakespeare’s Pictures’ provides you with all known portraits and pictures of Shakespeare with a description of each. They also have a blog with great articles.

Experience the joy of discovering Shakespeare

Thus, these are some of the best online Shakespeare translators of 2020.

They provide you with translations and summaries, analysis, quotes, descriptions, related knowledge, and so much more.

Exploring the marvelous world of Shakespeare has been made simpler and more enjoyable by these tools.

So, why wait? Lose yourself in the astounding of this great poet and playwright, and find out the amazing works.

You would be sure to miss quite a lot if you don’t give it a try at least once.

There is so much to discover, and these tools make the path a bed of roses. And when we know the joy of discovering, then we know that the effort is worth it!

Though in this case, the effort is quite minimized by these tools, which increases the joy manifold.

“We know what we are, but know not what we may be.”